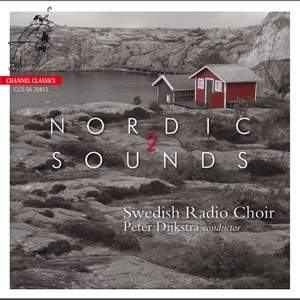 The CD features a.o. arrangements by Jan Sandström of improvised folk songs of the Sami people - whose singing is among the earliest continuing vocal traditions of Europe - but also recent works like the sixteen-part Kosijat (The Suitors; 2001) by one of the best-known contemporary composers in Finland, Jaakko Mäntyjärvi. The final piece on the cd, Muoayiayaoum is a phonetic formula, a sequence of vowels which open and close.

This is the purpose of the twelve-minute piece, as the composer Anders Hillborg ventures in search of the greatest possible precision in terms of timbre, pulse and dynamics. The level of vocal virtuosity that Peter Dijkstra elicits from his singers of The Swedish Radio Choir, collectively, is breathtaking and his cd ‘Nordic Sounds 1’ with music of Sandström as well as his most recent Poulenc recording ‘Figure Humaine’, received great critical acclaim and important awards!

This is such a choral feast that one can only shake one's head in wonderment that such lovely music is so little known outside Scandinavia. The Swedish Radio Choir's reputation for flawless singing is as solid as ever and, under Peter Dijkstra's direction, it has become a powerful though flexible instrument capable of tremendously warm and gilded singing.

The timbral and rhythmic precision of their performances does not prevent the singing from projecting a genuinely human warmth. The choir is responsive to the wide variety of styles represented here; one senses the singers' enjoyment.