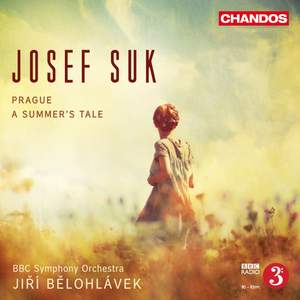 I. Voices of Life and Consolation

IV. In the Power of Phantoms

Two symphonic poems by Suk are performed here by the BBC Symphony Orchestra and Jiří Bělohlávek, who also brought us the highly acclaimed recording of the composer’s First Symphony and Ripening, which was Disc of the Month in the magazine BBC Music.

A Summer’s Tale is a highly personal work, rich and imaginative, not to mention brilliantly orchestrated in late romantic style. The work followed the heartfelt and sorrowful outpouring of the Asrael Symphony of 1905 – 06, composed in memory of his father-in-law, Antonín Dvořák, and wife, Otilka.

In the words of the composer: ‘After wild fleeing I find consolation in nature’. The jubilation of the opening ‘Voices of Life and Consolation’ is thought to emphasise nature’s healing powers and the composer’s putting a positive face to the world after the bleakness of Asrael. ‘Midday’ depicts the all-embracing heat of noon, while the Intermezzo, ‘Blind Musicians’, expresses compassion for those who can never appreciate the beauty that surrounds us. The storm and wild longing of ‘In the Power of Phantoms’ give way finally to the mystical calm of ‘Night’.

The Symphonic Poem Prague is likewise strongly personal and atmospheric, speaking of the history and mystery of Suk’s home city, its troubles and its triumphs. The opening section conjures up a picture of the early morning mists rising from the Vltava, the river flowing through the city. The mists begin to lift and the ancient fortress of Vyšehrad emerges high above on its rock. Gradually the mists disperse and Prague appears in all its glory in the sunlight. The mood then darkens, now speaking of past troubled times; but the work ends on a jubilant note, in a triumphant blaze of glory.

Belohlavek's pacing enhances Suk's abundant inspiration, often with intoxicating results. Throughout, the BBC Symphony Orchestra responds magnificently as an ensemble, bringing an almost operatic excitement to Prague...Both performances stand very high measured against the exacting tradition of some great Czech performances and are well served by this excellent recording.

The orchestral sound may not be distinctively Czech, but the vibrant playing is full of character and brings the work ['Prague'] alive brilliantly...They bring the same dedication to A Summer's Tale...Bělohlávek and the BBC SO make a powerful and impassioned case for this intense work, one that deserves to be much wider known.

Excellent performances: Belohlávek has done wonders to acquaint us with the lesser-known Czech repertoire.

the Czech woodwinds are inimitably individual...Belohlavek holds the tension in both pieces from the first bar to the last. Wonderful.

in this superb performance, it is the introspective passages [of 'Prague'] that impress and move.

The language is highly wrought – late-romantic, with just occasional hints that Suk may have been aware of the musical world that Debussy had revealed – and Suk's models were presumably were Dvor˘ák's late symphonic poems. But Suk's efforts lack the conciseness and the dramatic instincts of his mentor's.