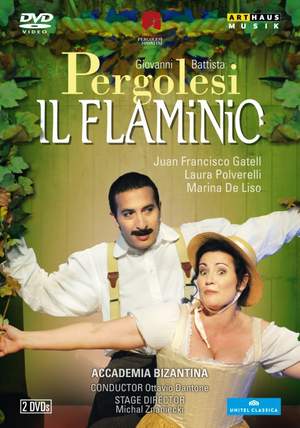 The recitatives are crisp, witty and delivered at a rate of knots. The production and staging are tight too...[the singers are] technically absolutely rock solid and terrific actors but never... — International Record Review, June 2013 More…

The 2010 Jesi production is conscious of the complexity of Flaminio for all its seeming simplicity and cleverly exploits the suggestive milieu of the Teatro Valeria Moriconi, in particular its shape and relatively small scale. Without any attempt at realism, (the main action takes place “in a villa on the outskirts of the city of Naples, complete with hunting lodge, etc.”, but just a handful of props to symbolise the bucolic atmosphere), the production concentrates on establishing a kind of meta-theatrical relationship to this repertoire work which sets out to highlight the interweaving and overlayering of truth and fiction, passion and irony, tragedy and comedy. The orchestra sits behind a broad wooden platform and suspended netting decorated with leaves; every so often scenes about the characters’ private lives open up on various levels (these serve to expand the audience perspective both horizontally and vertically), as if the plot were following the inner development of these living characters. The theatrical narrative unravels – through a brilliant succession of dramatic and light-hearted moments – to its predictable happy ending.

The result takes us a step closer towards finally rediscovering such masterpieces of the Neapolitan school of the 18th century: in addition to being highly serious, ingenious and fabulous entertainment in its own right, Il Flaminio is substantive proof of the key role Naples played in developing the genre for European audiences.

The recitatives are crisp, witty and delivered at a rate of knots. The production and staging are tight too...[the singers are] technically absolutely rock solid and terrific actors but never overplaying their comic hand...Dantone ensures that the pace of the drama is constantly changing in line with the unpredictable flow of the action