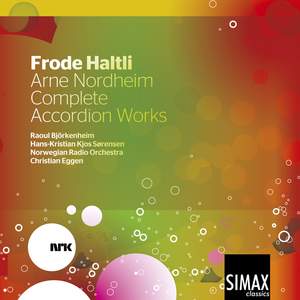 Haltli plays them all with great assurance and he's at his most imaginative in Flashing, the piece for solo accordion that has become one of the staples of the 20th-century accordion repertoire — The Guardian, 3rd January 2013, 3 out of 5 stars More…

Nordheim: Dinosauros – for accordion and tape

Norwegian accordionist Frode Haltli is held in the highest regard world-wide for his innovative work over the past 10 years, and has been involved in several successful albums for the German label ECM. On this Simax release he presents the first recording ever of the complete works for accordion by his fellow countryman Arne Nordheim. The disc also features the Norwegian Radio Orchestra under conductor Christian Eggen, as well as percussionist Hans-Kristian Kjos Sørensen and electric guitarist Raoul Björkenheim.

Frode Haltli began playing the accordion at the age of seven. His debut CD Looking on Darkness was released on the prestigious German label ECM in 2002. Further releases have included the albums Passing Images where he is joined by trumpeter Arve Henriksen, viola player Garth Knox and vocalist Maja Solveig Kjelstrup Ratkje, as well as Yeraz on which he performs with saxophonist Trygve Seim. Haltli has played as a soloist with orchestras worldwide and at contemporary music events in Warsaw, Witten and Huddersfield, as well as major jazz, classical and world music festivals. He has established links with several composers, among them Maja Solveig Kjelstrup Ratkje, Bent Sørensen, Rolf Wallin, Atli Ingólfsson, Hans Abrahamsen, Jo Kondo and Sam Hayden.

Haltli plays them all with great assurance and he's at his most imaginative in Flashing, the piece for solo accordion that has become one of the staples of the 20th-century accordion repertoire

Most impressive of all is the 26-minute "Spur"...Inquisitive and engrossing, it's at once alienating and beguiling, the suburban timbre of the accordion defied by its employment.