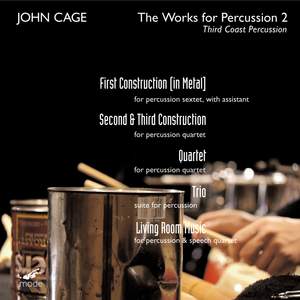 Mode records with pristine depth as a matter of pride, a strategy that bypasses the customary heart-searching about recorded sound and turns attention back on to the sonic object itself. — Gramophone Magazine, April 2013 More…

Quartet for 4 Percussion: I. Moderate

Living Room Music: I. To Begin

John Cage’s vision of the future of music was first shaped by an ntense creative period from 1935-1942, when he wrote many of the seminal works of percussion chamber music featured here. When he composed these works, the young Cage was basically the same age as the members of Third Coast Percussion.

This release includes all three of the groundbreaking 'Constructions'. 'First Construction' (in Metal) utilises dozens of metal instruments which are beaten, scraped and shaken, creating an other-worldly mixture of resonant sound unlike any heard before it. 'Second Construction' prominently features one of Cage’s greatest inventions, the prepared piano.

Finally, 'Third Construction' brings the greatest degree of complexity and the widest range of instrumental timbres yet, creating one of the first landmark pieces in the percussion chamber music literature.

-There are very few recordings of the early works 'Quartet' and 'Trio'.

-The surprisingly beautiful sounds of everyday objects come forth in Third Coast Percussion’s recording of 'Living Room Music', recorded onsite at the futuristic Ford House in Aurora, IL, designed by one of America’s most iconoclastic architects, Bruce Goff, in 1947. Third Coast utilizs the house itself as an instrument for the first movement.

All works dynamically directed and filmed by Ross Karre. The DVD features surround and stereo audio. Hailed by the Chicago Reader as “one of the finest new-music ensembles in the country,” Third Coast Percussion's performances have swiftly gained national attention for effortlessly combining the energy of a rock concert with the precision and sophistication of classical chamber music.

Mode records with pristine depth as a matter of pride, a strategy that bypasses the customary heart-searching about recorded sound and turns attention back on to the sonic object itself.

these performances have a special fluency and zest that sets them apart from most other recorded versions. The way in which Cage's sound world steadily expands through the three Constructions...is vividly exploited, while the rhythmic cycles that are so rigorously layered in all three become a means to an exuberant end

This second volume of his percussion music focuses on early works such as the hugely influential Third Construction (1941), a monumental piece incorporating instruments such as the Peruvian quijada...while in Living Room Music (1940), an actual room provides the sound sources so inventively mined here by the brilliant Chicago-based ensemble Third Coast Percussion.