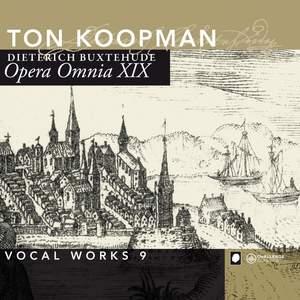 This is the 19th and penultimate volume in a highly acclaimed survey of the complete works of Dieterich Buxtehude by the renowned early music director Ton Koopman and the musicians and singers of Amsterdam Baroque. It is the ninth release devoted to the composer’s vocal works, and features compositions which are not linked to the liturgical service and are consequently extremely free and innovative in form and content.

The annual series of “Abendmusiken” were evening concerts that followed the afternoon vespers service. They were presented at St. Mary’s Church in Lübeck on the five Sundays after St. Martin’s Day (November 11). The programmes of the Abendmusiken were not restricted to any liturgical requirements and could add a new dimension to the spiritual function of sacred music. Consequently Buxtehude chose a selection of arias, concertos, and cantatas with texts taken from a variety of origins including biblical texts, mediaeval lyrics, church hymns, and modern poetry in both German and Latin languages. Of particular prominence are devotional and mystic poetic texts that relate to the Pietist movement of the later 17th century.

Ton Koopman is one of the world’s foremost early music specialists and directors. His recording of the complete Bach Cantatas on Challenge Classics received worldwide acclaim. He has also undertaken the daunting task of recording all of the music of his compatriot, the early baroque composer Dieterich Buxtehude. As president of the International Dieterich Buxtehude Society Ton Koopman is considered to be one of the world’s leading authorities on his music.

Koopman's monumental project continues its course as a unique achievement.