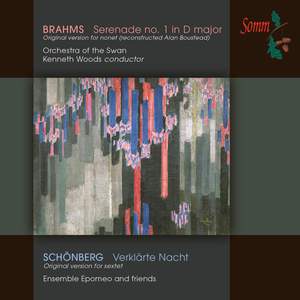 This pair of one-off live performances relives and condenses the battle over music in the second half of the 19th century...The dryness of the first violin-playing in Verklärte Nacht belongs... — Gramophone Magazine, Awards Issue 2014 More…

This disc documents the emerging mastery of two of music history's most powerful and closely linked artistic personalities -- Brahms and Schönberg, pairing the original chamber versions of the seminal works of their early maturity, which were primarily known through performances by much larger orchestral forces. Brahms's profound influence on Schönberg is clearly evident in his books and essays on Brahms's music as well as his arrangement of the Brahms Piano Quartet in G minor for full orchestra, now a staple of the orchestral repertoire.Schönberg's Verklärte Nacht is the key work in which his musical personality truly emerged onto the world stage. For much of the last hundred years, the work has been heard in his own arrangement for string orchestra but for our recording, the String Trio Ensemble Epomeo (Caroline Chin, David Yang and Kenneth Woods) have been joined by a stellar team of colleagues (Diane Pascal, Tom Hankey and Matthew Sharp) for a stunning performance of Schönberg's original version for string sextet, written in 1899, performed live during the 2013 Deal Festival. Brahms's beautiful Serenade in D major, written when he was 25, is a symphony in all but name and was his first major orchestral work. Brahms originally wrote the work for nonet before expanding it for larger forces on the advice of Joachim. Composer Alan Boustead has lovingly reconstructed the lost original version of this work for solo strings, flute, two clarinets, bassoon and horn, heard here in a scintillating performance by players from the Orchestra of the Swan conducted by their Principal Guest Conductor, Kenneth Woods whose first disc for SOMM's Schönberg chamber versions of Mahler's Das Lied von der Erde and Lieder Eines fahrenden Gesellen (SOMM0109) received an "IRR OUTSTANDING" and was hailed by MusicWeb as "something that every lover of Mahler should hear.

This pair of one-off live performances relives and condenses the battle over music in the second half of the 19th century...The dryness of the first violin-playing in Verklärte Nacht belongs to the effect of the performance as a whole, which majors on delicate tracery and does not attempt to compete with the weight of sonority afforded by the expanded version.

The principal players of the Orchestra of the Swan are a thoroughly accomplished group, the strings in particular achieving an impressive homogeneity and pleasing tonal blend...There's high praise, too, for the excellently balanced and well-matched pairs of clarinets and horns, and for the keenly authoritative flair of Wood's direction.

Few will have heard this nonet version of the Serenade...In this live recording a slightly chubby ugly duckling in its orchestral format suddenly achieves lightness and clarity. Thanks to this aptly named Stratford-based ensemble, it has turned into a swan.