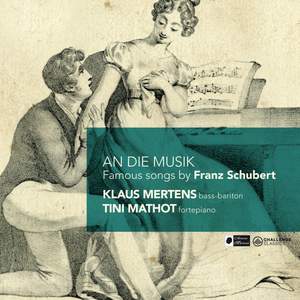 This recording of Schubert lieder features many of his most popular works in the genre including Die Forelle (The Trout), Erlkönig (The Earl King), Der Tod und das Mädchen (Death and the Maiden), and the title track An Die Musik (To Music). The bass-baritone soloist is the noted Bach specialist Klaus Mertens, and the fortepiano is played by Ton Koopman’s wife and regular musical partner Tini Mathot.

The German bass-baritone Klaus Mertens has made a name for himself as one of the most prominent and sought-after interpreters of the Baroque oratorio, and has recorded the great vocal works of Johann Sebastian Bach with numerous conductors. A soloist on more than 140 CDs and DVDs, he was a regular collaborator on the critically-acclaimed complete recording of Bach Cantatas by Ton Koopman and the Amsterdam Baroque Orchestra & Choir. He has also recorded Schubert’s great song-cycle Wintereisse for Challenge.

The keyboard player Tini Mathot enjoys a close collaboration with her husband and former teacher, Ton Koopman. Together they give recitals and perform in chamber music projects in the major concert halls of Europe, the United States and Japan. Tini Mathot regularly appears as a soloist together with Ton Koopman in concertos for two (or more) harpsichords and orchestra, and alongside him has recorded double concertos by J.S. Bach, C.P.E. Bach, J.F. Reichardt and C. Schaffrath with the Amsterdam Baroque Orchestra.