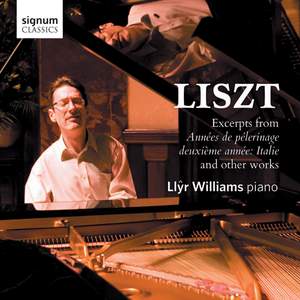 Williams is entirely on terms with the virtuoso requirements of the Tarantella from Venezia e Napoli...The intricate part-writing of Liszt's transcription from Wagner's Tristan und Isolde, too,... — BBC Music Magazine, January 2013, 4 out of 5 stars More…

A second solo disc on Signum from an insightful Welsh pianist. Llyr Williams is an acclaimed soloist, accompanist and chamber musician; highly sought after as a performer in the United Kingdom he was recently awarded a South Bank Sky Arts Award for his Beethoven Sonata Cycle at Greyfriars Kirk in Edinburgh in August 2011 – where he performed all 32 sonatas in just two weeks! This disc follows SIGCD226 'Pictures', a collection of works by Debussy and Liszt alongside Mussorgsky's 'Pictures at an Exhibition'.

Williams is entirely on terms with the virtuoso requirements of the Tarantella from Venezia e Napoli...The intricate part-writing of Liszt's transcription from Wagner's Tristan und Isolde, too, comes across with a stellar combination of absolute clarity and gorgeous piano sound.

Liszt’s piano music could have been written for Williams: he has the size of imagination, the temperamental bravura, the virtuosity-with-substance to make it sound elevated, not the stuff of charlatans...It’s a challenging programme to which he rises with immense authority, investing the Sonnets with the Olympian grace they deserve, and the Sonata with a mixture of barnstorming momentum and architectural scale.

Instead of heady bravura, with more deliberate tempi Williams deconstructs the music, as it were, shows you every nut and bolt, ensures every note is given its due weight and importance...and then assembles everything into performances of overwhelming power that often send a tingle up the spine. For Williams, less is more...Williams may be no Cziffra but offers another view of Liszt that is as valid as it is compelling.

Llyr Williams plays free and easy with the printed page … he does so in the context of performances that reveal such profound understanding, stylistic sophistication and obvious love of the music that I am completely won over.

The centrepiece is the three Sonetti del Petrarca, fabulous elaborations of Liszt’s own songs, and Williams lends them a suave grandeur. The suite’s Dante sonata finale is sternly, superbly dispatched; the Bénédiction de Dieu dans la solitude a solemn, beautiful contrast; the transcription of Isolde’s Liebestod a calmly ecstatic one.

Williams is a superb Liszt interpreter, never content to use even the most technically demanding music as just a vehicle for flashy display, but always looking beneath the elaborate surfaces for deeper rigour and meaning. That doesn't mean he ever understates the music's sense of theatre or misjudges its sense of scale, though; there's a tremendous power and intensity to his Dante Sonata