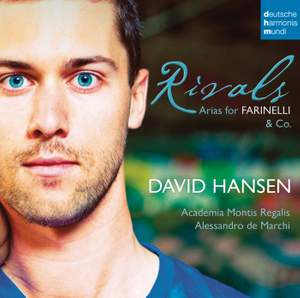 the programme showcases Hansen's formidable technique and flexibility as he flits from quick-fire coloratura to long-breathed cantilena...Hansen dazzles throughout with his vocal fireworks...de... — BBC Music Magazine, November 2013, 5 out of 5 stars More…

Recording of the Week,  Arias for countertenor/male soprano from Fagioli, Hansen, and Jaroussky

Argentine sopranist Fagioli scales the high Cs in a jaw-dropping recital of arias penned for the notorious star castrato Caffarelli, whilst Jaroussky explores music written by for his rival Farinelli by their mutual singing-teacher Nicola Porpora.

‘Rivals’ - David Hansen’s debut recording for SONY / DHM explores and celebrates the music of Farinelli and his castrato rivals: Caffarelli, Carestini, Bernacchi and others. These singers dominated the stages of Europe and it was not always Farinelli who reigned supreme... David Hansen’s album features nine world premiere recordings. He is accompanied by Alessandro de Marchi and his orchestra Academia Montis Regalis.

Recorded at the famous Academia at Mondovì in Piemont with Alessandro de Marchi and the musicians of the prestigious Academia Montis Regalis, the choice of arias demonstrates the remarkable breadth of David Hansen’s phenomenal technique, his musical versatility and expression.

the programme showcases Hansen's formidable technique and flexibility as he flits from quick-fire coloratura to long-breathed cantilena...Hansen dazzles throughout with his vocal fireworks...de Marchi draws some crack playing - here fiery, there serene - from the Academic Montis Regalis.

The flamboyant Vinci arias that bookend the anthology show Hansen's confident projection, agility and expressive use of embellishments...[his] middle range offers melodic expressiveness and dramatic compassion...Hansen has immense talent to offer in the right roles.

an intelligently planned recital...[Hansen's] basic sound is pure, sweet and not dissimilar to Philippe Jaroussky, he’s still very much his own man!

he's certainly an impressive performer, with a fine technique and a beautifully even tone up into the highest reaches of the counter-tenor range.