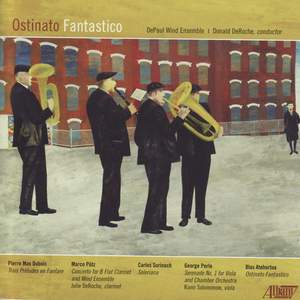 The DePaul Wind Ensemble always sounds good, but here it seems better than ever....I am very happy with this recording. The musicians play wonderfully, and it's an excellent program. — American Record Guide

The title of this recording, Ostinato Fantastico, is obviously taken from the title of Blas Atehortua's work. It has a kind of double meaning in the context of the series of recordings the DePaul Wind Ensemble has created with Albany Records. An ostinato is a variation form in which a theme or pattern is repeated throughout the piece, while the musical material around it is changed or varied. In a similar way the DePaul/Albany recordings have a consistent theme of presenting works for winds of two types: First, we have tried to offer seldom or never-recorded music by important composers, music that we don't want to lose from the repertoire. Second, we have presented solo works with wind accompaniment, played by excellent soloists. As the important repertoire for winds develops and is defined over the next decades, we will need to establish and perform the emerging "canon" of wind music. Nobody knows what pieces will be important 100 years from now, but we do need to seek out the best music and insure that it doesn't fall by the wayside because it has been ignored. It is also important to provide a repertoire of excellent solo pieces with original and well-transcribed wind accompaniments. These two themes represent the ostinato of the DePaul Albany series.

The DePaul Wind Ensemble always sounds good, but here it seems better than ever....I am very happy with this recording. The musicians play wonderfully, and it's an excellent program.