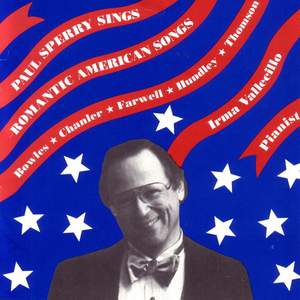 Hundley: Come Ready and See Me

Hundley: On a Wife (An Epitaph)

Hundley: Some Sheep are Loving

Bowles: Once a Lady Was Here

Thomson, V: There is a Garden in her Face

Safe in Their Alabaster Chambers

The Grass So Little Has to Do

Tie the Strings to My Life

Chanler: These, My Ophelia

Chanler: I Rise When You Enter

"Since I first started going to song recitals, I wondered why I heard so few American songs," says Paul Sperry in the booklet notes. "Was it that there weren't many good ones? I doubted it, and I have subsequently learned that I was right. While researching little known American songs for three Bicentennial celebration recitals, I discovered that songwriting has always attracted American composers and that they have given us a large and fascinating repertory encompassing every conceivable style. The only difficulty I face as a performer is to choose which ones to sing, or, in this case, to record. I have chosen these five composers because they are all "Romantics:" they favor tonal harmonies, attractive melodies, and a close relationship between words and music; they seek to convey the emotional content of the poetry in musical terms. But more specifically, I chose them because I love their songs."