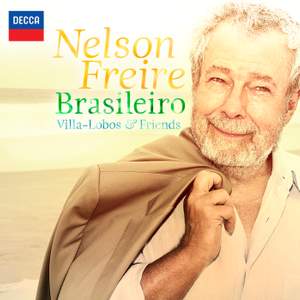 Freire's kind of artistry raises [the repertoire] to an entirely different level. There's plenty of flair and soul, yet the playing is always crystalline and precise, perfectly pedalled, the... — BBC Music Magazine, December 2012, 5 out of 5 stars More…

7. The Fife of a Precocious Daydreamer (A gaita de um precoce fantasiado)

Villa-Lobos: A Lenda do Caboclo

In containing Freire’s personal choice of rarely recorded pieces by seven other lesser-known Brazilian composers whose music helped shape his artistic personality during his formative early years, the album also offers a sonic “portrait of the pianist as a young man”.

Comprising works that roughly span the seventy or so years of Villa-Lobos’s own lifetime, Freire’s chosen repertoire chronicles the efforts of three generations of Brazilian composers to forge a recognisably national musical language out of an amalgam of European influences and indigenous folk and popular styles.

In combination with his trademark technical mastery and legendary sense of melodic line, Nelson Freire’s quintessentially Latin American temperament and innate sense of rhythmic ease ensure that he brings a uniquely authentic touch to the rarely heard piano music of his native land.

Freire's kind of artistry raises [the repertoire] to an entirely different level. There's plenty of flair and soul, yet the playing is always crystalline and precise, perfectly pedalled, the colours as subtle as a Debussy prelude...Just drop-dead gorgeous repertoire and performances: I don't think I've enjoyed any piano recording more this year.

Freire presents a masterlcass in nonchalant playfulness, capturing to perfection the charm of a composer often criticised for being too fecund and unselfcritical but here heard at his best...Freire is a class act - and 'Brasiliero', immaculately recorded by the way, is sheer delight from start to finish.

Freire characterises and colours each one inimitably, never searching for emotional depths that aren't there, nor attempting to confer profundity on music that is mostly intended simply to be enjoyed...if there is a more perfectly played piano disc released this year, we will be very lucky indeed.