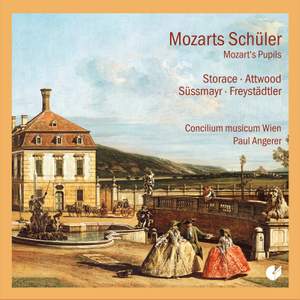 No undiscovered masterpieces emerge from this fascinating collection, but the piano chamber works of Stephen Storace and Thomas Attwood are beautifully crafted. — BBC Music Magazine, December 2012, 3 out of 5 stars

Transcribing and copying were methods of learning and earning in Mozart's time. In this way Mozart‘s 'scholars' also profited from him - Hummel lived with him for two years, Süßmayr worked with him, Freystadtler, Eberl, Storace were close to him and watched his fingers with open ears. Mozart‘s studies have been handed down by Attwood (W. A Mozart, New edition of the complete works, Series X, Supplement) - today still important for all those who study composition and interpretation. It is a display of Mozart‘s great, almost playful mastery, which he drew from practice with great ability, and this he also handed down. It is important to pay attention to the roots and branches of this ingenious stem of Mozart. We can be justified in calling the four talented 'descendants': Attwood, Storace, Süßmayr and Freystadtler 'scholars'.

No undiscovered masterpieces emerge from this fascinating collection, but the piano chamber works of Stephen Storace and Thomas Attwood are beautifully crafted.