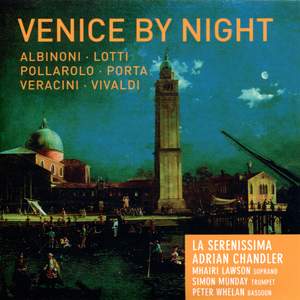 a delightful vignette of 18th-century Venetian nightlife...Lawson is, in turn, a gondola-borne singer...equally at home in the simplest syllabic songs, genlte cantabile and, at the end, a sparkling... — BBC Music Magazine, November 2012, 5 out of 5 stars More…

Adrian Chandler’s and La Serenissima’s 10th release for Avie – coinciding with the label’s 10th Anniversary – has all the hallmarks that have made the Vivaldi specialists one of the best-selling and acclaimed period-instrument bands performing today. Adrian’s erudition and his ensemble’s crowd-pleasing performances combine to produce recordings that are at once popular and enlightening. Venice by Night evokes an era of the Venetian Republic when the arts flourished, attracting audiences from all over Europe including scores of royalty. Feeding the tourist trade, the resident composers revelled in creating everything from grand operas and serenatas, virtuoso concertos and sinfonias, motets and gondoliers’ ballads. As with the chart-topping Vivaldi: The French Connection 2 (AV2218) which featured the world-premiere recording of the flute concerto Il Gran Mogol, Adrian has once again unearthed numerous works from this period that are recorded for the first time.

a delightful vignette of 18th-century Venetian nightlife...Lawson is, in turn, a gondola-borne singer...equally at home in the simplest syllabic songs, genlte cantabile and, at the end, a sparkling Vivaldi duet di agilita with trumpet. Peter Whelan is a virtuoso bassoonist...Simon Munday proves an impeccable trumpeter...With five 'first recordings', this is not to be missed.

This exploration of early-18th-century Venice functions cleverly on several levels. Time-travelling grand tourists are invited to spend an imaginary evening travelling around La Serenissima's diverse musical attractions...and sensing some of the different types of public music the city has to offer...Peter Whelan's feats of technical agility are astonishing.