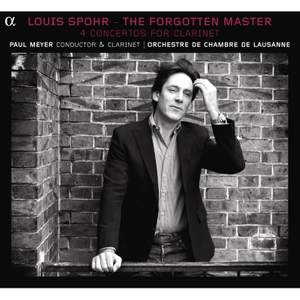 Meyer seems largely attuned to the solo parts edited by Stanley Drucker...[he] plays and conducts...assertive or pliant in his role from the rostrum. The conductor in Meyer is very good, the... — Gramophone Magazine, November 2012 More…

We are only just beginning to rediscover the works of Louis Spohr (1784-1859), who was not only a composer, but also a virtuoso violinist, possibly the greatest conductor of his time, and a renowned teacher – a man who played a leading role in musical life in Germany in the nineteenth century. His works – almost three hundred, covering many genres – bear the mark of Viennese Classicism, but his harmonic research announces the advent of the Romantic period.

Ten or so of his compositions require the clarinet, including four concertos, belonging to two different periods in his life. Wishing to be as faithful as possible to the original works for this recording on the Alpha label, the clarinettist and conductor Paul Meyer approached the Internationale Louis Spohr Gesellschaft in Kassel, which possesses the original manuscripts of the Fourth Concerto, the sketches for nos. 3 and 4, and copies of the manuscripts of nos. 1 to 3.

This magnificent performance by Paul Meyer, soloist and conductor, with the Orchestre de Chambre de Lausanne, gives us an opportunity to discover (or rediscover) these very fine works.

Meyer seems largely attuned to the solo parts edited by Stanley Drucker...[he] plays and conducts...assertive or pliant in his role from the rostrum. The conductor in Meyer is very good, the soloist fabulous. Not only does he disdain formidable obstacles, he brings shape, strength and the beauty of entrancingly hushed enunciation to a whole range of Spohr's writing.