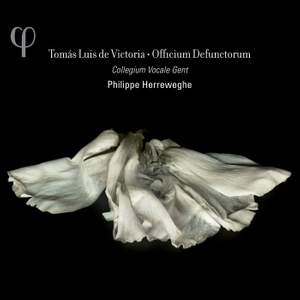 The 13 voices are as finely balanced and harmonious as you could wish, and throughout the recording there is immaculate tuning and exceptional attention to detail. The sense of architecture in... — BBC Music Magazine, Christmas 2012, 4 out of 5 stars More…

Tomás Luis de Victoria is definitely one of the most important composers in the music history of Spain. His masterpiece is the ‘Officium Defunctorum’, published in Madrid in 1605. In this requiem – written for the funeral of Maria of Austria, daughter of Emperor Charles V – the composer reached a mystical intensity of expression.

Philippe Herreweghe just loves composers “who know how to build entire worlds with sounds, recognizable from the first notes, profound and full of richness”. For him Tomás Luis de Victoria is one of them, “one of the greatest musical minds ever”.

The 13 voices are as finely balanced and harmonious as you could wish, and throughout the recording there is immaculate tuning and exceptional attention to detail. The sense of architecture in the motet Versa est in luctum, for example, is wonderfully judged

The [Requiem]'s dramatic potential is not overtly exploited but rather suggested, such is the concentrated, cut-glass quality of the singing at its best...Fine as this account of the Requiem undoubtedly is, the series of accompanying motets contains some of the disc's finest singing.

Herreweghe explores evey inflection of Victoria's score, includingt its restrained drama and grief transfigured by faith. The plainchant passages are sung with exceptional fluency and grace...The singers' diction is strikingly clear without seeming exaggerated...[Herreweghe] and his choir obviously understand each other and Victoria's music at the deepest level. A masterly recording in every way.

a CD of such beauty that it needs to be heard by every lover of Renaissance choral music. The music itself is stunning...Herreweghe’s 13 singers do it justice with performances that strike a perfect balance between lusciousness and clarity, expression and nobility.