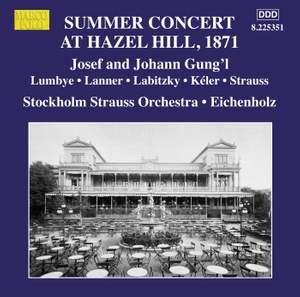 From one of the most famous 19th-century families of musicians and known as “The Strauss of Berlin”, Hungarian-born Josef Gung’l toured widely with his orchestras, and the series of 61 concerts they gave at Hasselbacken, Stockholm in 1871 became one of the greatest events in the history of music in Sweden. This programme recreates such an evening at Hazel Hill, with waltzes such as Gung’l’s memorial to Johann Strauss I, Die Immortellen, dances by celebrated contemporaries, and nephew Johann’s famous march En Avant!