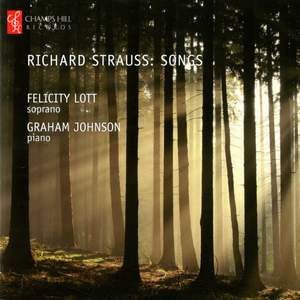 Lott was still at her peak when these recordings were made in 2002, and has a background of great affinity with the Strauss muse...Her voice and phrasing are still at their glorious finest, and... — Gramophone Magazine, October 2012 More…

This delightful recital of Strauss songs by Dame Felicity Lott focuses on songs composed between 1885 and 1901, the years of Strauss’s richest song-writing genius.

Partnered by her long-time collaborator, Graham Johnson, Dame Felicity sings various Nocturnes and Fantasies, songs about flowers, and then, grouped as “Valedictions and Lullabies”, some of Strauss’s best-known songs, including Allerseelen and Muttertändelei.

The disc concludes with one of his best-loved songs, ‘Morgen’. This is the last of the four Op.27 wedding-gift songs for his wife, Pauline de Ahna: “…breathless rapture turned into music, one of the great songs of the world…” [Michael Kennedy, 2003]

Dame Felicity Lott is considered one of the greatest sopranos of the 21st Century. Her operatic repertoire ranges from Handel to Stravinsky; and her formidable international reputation is as an interpreter of the great roles of Mozart and Strauss.

Graham Johnson is recognised as one of the world’s leading vocal accompanists. He was made an OBE in the 1994 Queen's Birthday Honours list and he was also made an Honorary Member of the Royal Philharmonic Society in February 2010.

Lott was still at her peak when these recordings were made in 2002, and has a background of great affinity with the Strauss muse...Her voice and phrasing are still at their glorious finest, and so is her partnership with Johnson. The result is a magical recital, naturally recorded.

With Johnson's charmingly modest and unfailing attendance, this is a recital peppered with exquisite moments of Olympian power and heroic breath control from Lott. These qualities give the lie to the fact that her remarkable voice is into its sixth decade! It is almost ideal for Strauss here: warmly lyrical, clear, lithe and sensuously intoned, majestic in its dynamic and emotional colourings.