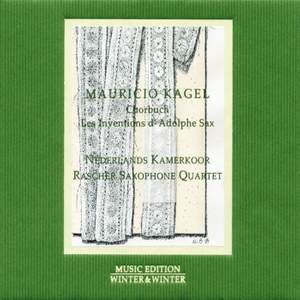 This Winter & Winter cd of 'Chorbuch' and 'Les Inventions d' Adolphe Sax', recorded in December 2007, was Mauricio Kagel’s last recording, delayed due to unexpected death in the year 2008.

The centrepiece of the album, 'Les Inventions d' Adolphe Sax' was commissioned by the Nederlands Kamerkoor, who invited the acclaimed Raschèr Quartet to participate. As a premiere recording and with Kagel’s artistic participation a masterpiece was created. The Nederlands Kamerkoor and Mauricio Kagel were closely connected through a long outstanding artistic collaboration and unique shared experiences.

At the end of the recording, choir director, Leo Samama took a funny snapshot of the 'megaphone' choir. In the middle of which, completely covered by his megaphone, sits the composer.

The artist Ursula Burghardt, Mauricio Kagel’s wife, created the images, which are used as the artwork for this release.