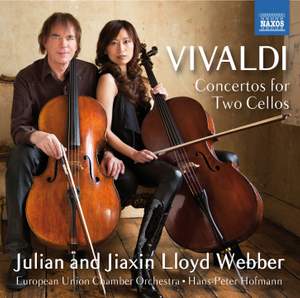 The first arranger of Vivaldi’s concertos was Vivaldi himself, and Julian Lloyd Webber’s new versions in this recording reflect the composer’s pragmatic attitude and zest for experiment. Vivaldi’s Concerto in G minor RV 531 is his only original concerto for two cellos. Alongside this appear works both popular and recently discovered, the mercurial moods of the cellos representing instruments from mandolins to hunting horns. Piazzolla’s Milonga displays all of his most distinctive hallmarks. Julian and Jiaxin Lloyd Webber’s acclaimed album A Tale of Two Cellos can be found on Naxos 8573251. This release follows Julian and Jiaxin Lloyd Webber’s highly successful album A Tale of Two Cellos (8573251), with its two cellos “beautifully played and blended together” (Gramophone) and considered a thing of “rare beauty” by The Strad. This recording of Vivaldi concertos will have poignant associations and special value for Julian’s many fans, as he has since been forced to withdraw from performing due to injury. Vivaldi’s ever popular music dressed anew by such an internationally outstanding artist is a guarantee of global interest and very substantial sales.