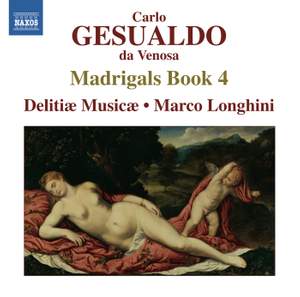 Gesualdo’s Fourth Book of Madrigals contains some of the most inspired and anguished vocal works in the entire madrigal repertoire, written while the composer was tormented by remorse after the murder of his wife and her lover. This collection is filled with technical innovation and extremes of expressiveness in its setting of highly dramatic texts. Unexpected dissonance, harmonic twists and elusive asymmetries all serve to dismantle the compositional rules of the period. Previous volumes in this series have been widely acclaimed. The Guardian described Book 2 (8570549) as having “great beauty and lyrical force”.