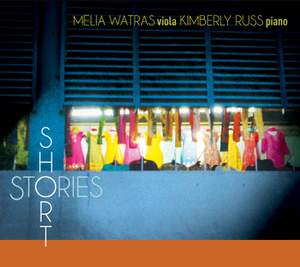 I. Small Piece of the Story

Short Stories demonstrates the versatility of the viola. In gathering these works, I wanted to find a wide variety of sound, color, and emotional content. This collection shows the viola’s warmth and depth, while also displaying its virtuosic and expressive capabilities.

Henryk Wieniawski (1835-1880) and Henri Vieuxtemps (1820-1881) are often regarded as violinist’s violinists. As virtuosos from the late Romantic era, they are legendary as performers, and wrote works that display violin technique, while at the same time showing an elegant lyricism.

The viola developed into a solo instrument later than the violin, so it is no coincidence that many of the pieces on this CD are from the 20th and 21st centuries.

A great joy in my musical life is working with composers, and I feel fortunate to have been able to meet and collaborate with a number of formidable ones. I met Betsy Jolas (b.1926) at a concert in Syracuse, NY and, taken with her music, was thrilled to record Episode sixième. My admiration and friendships with Dan Visconti (b. 1982), Andrew Waggoner (b. 1960), and Anna Weesner (b. 1965) resulted in performing Dan’s Hard-Knock Stomp and commissioning Andrew and Anna to write their pieces Elle s’enfuit and Flexible Parts, respectively.