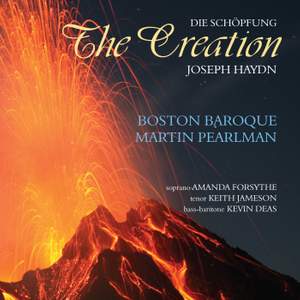 [a] clean account, nicely scaled and finely balanced...There's skilful work throughout from the three soloists...Pearlman displays a keen sense of the music's shape and encompasses its range... — BBC Music Magazine, September 2012, 4 out of 5 stars More…

The three-time Grammy-nominated ensemble, widely regarded as ‘one of the world’s premier period instruments bands’ (Fanfare), will mark the beginning of its relationship with Linn with a recording of Haydn’s The Creation.

Soloists Amanda Forsythe, Keith Jameson and Kevin Deas will join the ensemble and conductor Martin Pearlman for the performance of Haydn’s crowning achievement.

The Creation remains one of the greatest works of choral repertoire and has been astonishing audiences since its premiere in 1798.

The ensemble’s previous performances of The Creation have received rave reviews, with the Boston Globe stating: ‘Boston Baroque performed [Haydn’s Creation] with vibrant color and a fleet momentum…and made it a vivid, effervescent occasion.’

Boston Baroque's recordings—of which Fanfare magazine wrote ‘each one is an incomparable gem’— are heard by millions on classical radio stations in North America and Europe.

Boston Baroque's many career milestones include the American premiere of Rameau's Zoroastre; a Mozart opera series including Marriage of Figaro, Così fan tutte, and the American period-instrument premieres of Mozart's Don Giovanni and The Magic Flute; and a revelatory exploration of the Beethoven symphonies on period instruments.

[a] clean account, nicely scaled and finely balanced...There's skilful work throughout from the three soloists...Pearlman displays a keen sense of the music's shape and encompasses its range of character without over-emphasis. The overall sound picture is perfectly arranged for definition as well as grandeur.

Weil's conception of the work has changed little since his Sony recording with Tafelmusik nearly 20 years ago: brisk, no-nonsense choral singing, topped by eager, bright-edged (if not always perfectly-tuned) boys of the Tolzer Knabenchor; excellent choral-orchestral balance...Where Weil, 2012 vintage, scores decisively over his earlier recording is in his soloists...Best is Kevin Deas...with as sonorous a lower register...as any Raphael on disc.

Forsythe has a most pleasing voice, bright, clear and readily communicative. She has the agility required...and there is a smile in her voice that is very winning...[Jameson] gets right inside the text, his singing most musical, with a particularly satisfying legato...In all, this is a delightful, charming and often moving performance on a smallish scale, one that you may find rather lacking in drama.

Pearlman adopts near-ideal tempi for every number, and his choir and period band — medium forces for a work the composer conducted with up to 200 — are excellent. Two of his soloists, Amanda Forsythe and Kevin Jameson, sound more like cheeky servants than Archangels, but Kevin Deas’s resonant bass notes and liquid baritone ones are perfect for Raphael and Adam.