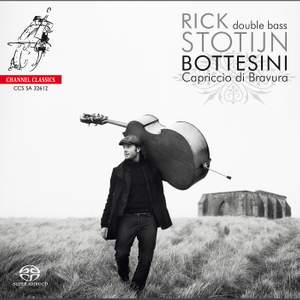 Bottesini: Duo Concertante on Themes from Bellini’s I Puritani for cello, double bass and orchestra

“The music of Giovanni Bottesini is a must for double bass players. It was a dream-come-true for me to have the opportunity to record my favourite Bottesini pieces with my favourite ensemble Amsterdam Sinfonietta, who I have so enjoyed working with for the past ten years. And it is an unforgettable experience to make a recording with friends including the top soloists Liza Ferschtman, Monika Leskovar and Hans Eijsackers, not to forget my own sister Christianne.” Rick Stotijn

Bottesini, whose music is little played in international concert halls, was a colourful composer, about whom many an anecdote could be told. There can be little doubt that he was born with a string instrument in his hands. He studied violin and viola but chose for the double bass at age thirteen. He shone as a soloist, led the double bass section in opera orchestras, he conducted ánd he composed.

Stotijn received his first lessons at the age of eight and won his first prizes at the Princess Christina Competition and the Foundation of Youth Musical Talent, followed by numerous master classes and courses. Many solo appearances at home and abroad were soon to follow. Rick is currently leader of the double basses in the Amsterdam Sinfonietta and the Swedish Radio Orchestra. He is also guest leader of orchestras including the Royal Concertgebouw Orchestra, the Mahler Chamber Orchestra, Rundfunk Sinfonie Orchester Berlin and the London Symphony Orchestra.