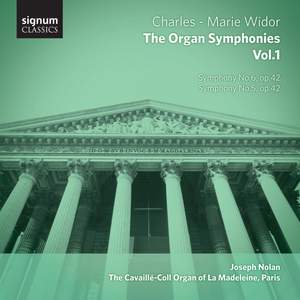 Aficionados of Widor's Toccata will be interested to know that Joseph Nolan adopts the slow and stately approach, rather than the brisk and brash one...Nolan's carefully prepared and immaculately... — Gramophone Magazine, September 2012 More…

Bridging the generations from Mendelssohn to Messiaen, Empire to Republic, Widor was born to the organ. His Lyonnaise kinsfolk were organ-builders, he showed early talent for the instrument, and for decades was the embodiment of its might and splendour across the Gallic domain - his ‘Organ Symphonies’ were genre-defining in their influence.

Joseph Nolan is an internationally renowned organist, acclaimed as a "brilliant and such an astute musician" by Gramophone. He was appointed to Her Majesty’s Chapels Royal, St James’s Palace in 2004, and has since been invited to perform and record in some of the world’s premiere venues – including the refurbished Organ of Buckingham Palace Ballroom (SIGCD114) and the Organ of Saint-Sulpice in Paris (SIGCD167). The Cavaillé-Coll Organ of La Madeleine, Paris is a similarly renowned instrument, with former chief-organists including Camille Saint-Säens and Gabriel Fauré.

Aficionados of Widor's Toccata will be interested to know that Joseph Nolan adopts the slow and stately approach, rather than the brisk and brash one...Nolan's carefully prepared and immaculately delivered performances also demonstrate that, while the Toccata may be Widor's most popular creation, it is by no means his best...this has few challengers when it comes to the utter authority of the performances.

Nolan gives completely convincing performances of both works…his registration is exemplary…organ enthusiasts should certainly acquire this disc for the sake of Nolan’s admirable musical intelligence.