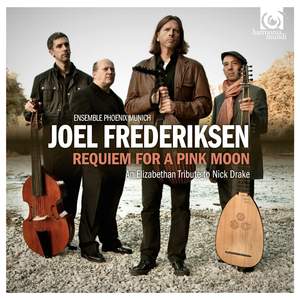 Requiem for a Pink Moon

An Elizabethan Tribute to Nick Drake

Frederiksen's Tudor take intersperses Drake with Dowland and others. Probably too stiff for Drake fans, but it's all nicely done. — BBC Music Magazine, July 2012, 3 out of 5 stars More…

Drake: The Firste Booke of Songes: Place to be

Dowland: The Firste Booke of Songes: No. 18, His golden locks, Verse 3

Cavendish: Wand'ring In This Place

Drake: Rider on the Wheel

Drake: Time has told me

Drake: Hanging on a Star

Drake: Voice from the mountain

Dowland: The Firste Booke of Songes: No. 20, Come, heavy sleep

Drake: From the Morning

Joel Frederiksen and his musicians have gone back in time all the way to . . . 1974. That was the year of the death, aged 26, of the British singer-songwriter Nick Drake, who was to achieve fame only posthumously. In 1972 he released his finest album, 'Pink Moon', which became legendary at the end of the ’70s and is here revisited in the style of a promenade through the Elizabethan era. A decidedly offbeat musical project that will surely intrigue fans of both Nick and Joel . . .

"I was deeply affected by Nick Drake’s music from the moment I first heard it, in 1982, just eight years after his death. The union of the plaintive voice, the intricate guitar accompaniments, and the moving lyrics in songs like Time has told me spoke to me. From the recordings I learned to play some songs, performing them from time to time with my guitar… The idea for 'Requiem for a Pink Moon' had to wait a good long time. Once in a while, when I did find a guitar in my hands, I played 'Time has told me', and noticed how people responded to Nick’s music. Then, very surprisingly, in 2000 I heard the song 'Pink Moon' in a movie theater as part of a Volkswagen ad, and was struck again by Nick’s particular art. It is an art filled with melancholy, a feeling and a concept uniting him with the singersongwriters of the Elizabethan age. I kept running into people of all ages who knew about Nick and eventually had the idea of a Requiem. The idea of juxtaposing old and new appealed to me. I decided that I would perform portions of the Gregorian Requiem Mass (the Mass for the dead) alongside Nick’s songs arranged for early instruments...

Rest in peace, Nick, and thank you for the beautiful music." Joel Frederiksen

Frederiksen's Tudor take intersperses Drake with Dowland and others. Probably too stiff for Drake fans, but it's all nicely done.

[Buresova’s] gleaming bright, laser-like soprano penetrates to the heart of Smetana’s score…a classic performance, as fine as any on disc…The superb recorded sound – state-of-the-art compared to the sometimes wiry Supraphon versions – only enhances the desirability of this wonderful new set. I haven’t enjoyed and opera recording as much all year.

the sequence shifting from Drake's "Rider on the Wheel" through Dowland's "Time Stands Still" to Drake's "Time Has Told Me" works both thematically and musically, despite the difference of Frederiksen and Timothy Leigh Evans's courtly vocal manner from Drake's original air of resignation.

Several of these songs take on a warmth, clarity and openness which is missing from Drake’s originals...And what could have been a maudlin wallow emerges as transcendent, affectionate and uplifting. Frederiksen sneaks in his own song, Ocean, after Time has told me. A sweet tribute, and you find yourself wondering how it would sound in Drake’s own voice.