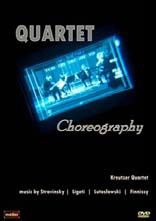 These films are edited to mirror something of the composer's approach to structure but, more significantly, to allow viewers to see the physical interaction between player and instrument...Faces... — Gramophone Magazine, October 2012 More…

This DVD explores the interaction between the members whilst performing these four key 20th Century works for String Quartet.

The quartet firmly believes that music should be seen as well as heard. The mechanics of playing and the communication of the players are what create the art.

The Kreutzer Quartet has forged an enviable reputation as one of the Europe’s most dynamic and innovative string quartets. The ‘Independent’ newspaper summed up their playing as ‘Passion, Grace and Steel…’.

They are the dedicatees of numerous works, and over many years forged creative partnerships with composers including Sir Michael Tippett, David Matthews, Michael Finnissy, Judith Weir, and Haflidi Hallgrimsson. They have a particularly strong relationship to a cross-section of leading American composers, having collaborated intensively with the great George Rochberg in the last few years of his life, as long as working closely with figures as Elliott Schwartz, and the prolific symphonist Gloria Coates.

As recording artists they have won critical acclaim for their discs on the Naxos, Metier, and Chandos labels. Their work in collaboration with art galleries has garnered much attention, and large audiences, particularly their annual residency at the Tate Gallery, St Ives. In 2008 they appeared at several Festivals including the Venice Biennale, and the Montpelier Festival. They are ‘Artists in association’ at York University.

Double sided DVD - one side NTSC, one side PAL

These films are edited to mirror something of the composer's approach to structure but, more significantly, to allow viewers to see the physical interaction between player and instrument...Faces darken, moods change, body language becomes slightly defensive. And Stravinsky was right: we hear these moves, see the sound differently.