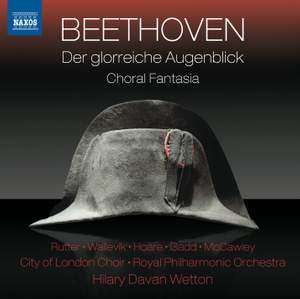 with the aid of a strong team of soloists, Hilary Davan Wetton makes as strong a case as possible for [Der glorreiche Augenblick]...The performance [of the Choral Fantasy] here benefits greatly... — BBC Music Magazine, July 2012, 5 out of 5 stars More…

Beethoven’s unusual cantata Der glorreiche Augenblick (The Glorious Moment) is filled with patriotic praise for Vienna and tributes to the kings and princes of Europe after the defeat of Napoleon. It was performed alongside his symphonic Wellington’s Victory at its première in 1814. The Fantasia in C minor for piano, chorus and orchestra opens with a virtuosic, improvisatory Adagio for the piano. The work’s main theme anticipates the famous Ode to Joy setting Beethoven later devised for his Choral Symphony.

Beethoven’s cantata Der glorreiche Augenblick is rarely performed and very seldom recorded, usually only appearing amidst vast sets of Beethoven’s complete works. This is in fact a remarkable and distinctive piece which deserves wider availability, and its appearance with the distinguished forces of the Royal Philharmonic Orchestra and a very fine gathering of soloists will make it an easy and popular choice for seekers of fresh Beethoven material. The coupling with another occasional and relatively low-profile work, the Choral Fantasia, is entirely logical and eminently satisfying.

with the aid of a strong team of soloists, Hilary Davan Wetton makes as strong a case as possible for [Der glorreiche Augenblick]...The performance [of the Choral Fantasy] here benefits greatly from the contribution of Leon McCawley, whose account of the long opening piano solo has just the right degree of dramatic intensity and improvisatory freedom. With first-rate recorded sound, the disc is strongly recommended.

[Wetton] has a comprehensive grasp of the score [of Der glorreiche Augenblick]. From grandeur to contemplation, the mix of many elements is persuasively interpreted...Leon McCawley plays the 26-bar solo introduction [to the Choral Fantasia] with a sense of ad-lib abandon, coruscating in the hailstorm of notes at its fortissimo climax.

Davan Wetton rouses his forces to hymn the praises of Vienna and Emperor Franz of Austria, drawing from the City of London Choir the full-bodied outpouring that one expects at celebratory occasions. The Westminster Boys Choir adds pristine treble tones to the concluding chorus. The Royal Philharmonic plays with relish in both the cantata and the Fantasia

The choirs are consistently excellent and they make light of Beethoven’s demanding vocal writing. The playing of the Royal Philharmonic is first-rate in every way, revealing an adoption of historically informed performance practice. Hilary Davan Wetton’s enthusiasm and love for both works is obvious

thrill-a-minute stuff that draws you in and sweeps away any scruples you may have. The filler is the Choral Fantasia with Leon McCawley as piano soloist, done in a very grand manner, though also with great panache.