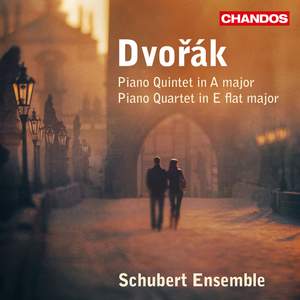 The Schubert Ensemble are not only adept at delivering the melodic side without an ounce of sentimentality, they show a strong appreciation of the inherent drama that energies these works, particularly... — BBC Music Magazine, August 2012, 5 out of 5 stars More…

Founded in 1983, regularly giving more than sixty concerts a year, and having performed in over forty different countries, the Schubert Ensemble is firmly established as one of the world’s leading exponents of chamber music for piano and strings.

The Ensemble here performs Piano Quintet No. 2, which is arguably one of Dvořák’s greatest and most popular chamber pieces, thanks to its memorable melodies and sheer panache. The composer took great pride in his country, in his people, their character and cultural heritage, all of which is evident in this work. In the words of the late British Dvořák scholar John Clapham: ‘[it] probably epitomizes more completely the genuine Dvořák style in most of its facets than any other work of his. Laughter and tears, sorrow and gaiety, are found side by side, as well as many moods that lie between these two extremes. All are presented with consummate mastery, they are decked in a wide range of instrumental colouring, and through the whole sweeps the life-blood of vital rhythm.’

Dvořák wrote his Piano Quartet No. 2 at the persistent request of his publisher Simrock in Berlin, who had long recognised the sales potential of the composer’s music. He was not wrong; the work went on to become one of Dvořák’s most frequently played chamber works. Here, Dvořák revels in taking on both tranquil and stormy moods; the feeling of great joy present in the third movement pre-echoes the sunny disposition of his Symphony No. 8, which was to follow immediately after the Quartet.

The seven songs which make up the cycle Gypsy Songs were written in 1880 to texts by the Czech poet Adolf Heyduk. The fourth, ‘Songs My Mother Taught Me’, is the best known internationally of all Dvořák’s songs. The version heard here, for piano quartet, was arranged by the four core members of the Schubert Ensemble, and is a highly popular encore piece performed at many of its concerts.

The Schubert Ensemble are not only adept at delivering the melodic side without an ounce of sentimentality, they show a strong appreciation of the inherent drama that energies these works, particularly in the Piano Quartet...As a whole these excellently-recorded performances lead a well-populated field.

Happily, the Schubert Ensemble meet Dvorak on his own terms; no mean feat given the previous dominance in this repertoire of home-grown musicians. The mixed make-up of the ensemble may be important in this regard, for these are emphatically not recordings made by a pianist and a string quartet...This is an unqualified delight.

performances that are finely honed and full of quicksilver playing, alert to every nuance in Dvorak's writing...Well blended, but with a strong guiding hand in the shape of the pianist William Howard, they bring a nice intensity to the Dumka's opening, and a sparkling athleticism to the 'vivace'...Oozing charm from every available duct, [the song transcription] makes a delightful end to a fine release.

a wealth of clever detailing emerges from this quartet and guest violinist Alexandra Wood. The tones chosen are understated, the articulation feathery, dry or dewy. This is Dvorák played not as a gifted naïf but as a sophisticate, subtle and assured.