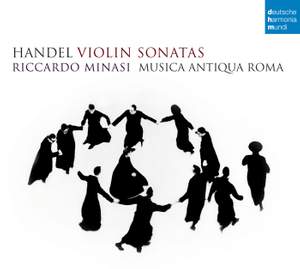 the sumptuous underlay sometimes over-eggs the music, yet it's very much at one with Minasi's warmly lyrical yet purposeful approach...Idiosyncrasies aside, compelling stuff. — BBC Music Magazine, October 2012, 4 out of 5 stars More…

Riccardo Minasi, born in Rome in 1978, has performed both as soloist as well as concert-master with many important orchestras. Riccardo Minasi is a conductor and a musicologist as well as a leading violinist in the early music field. His critical edition of Vincenzo Bellini’s opera “Norma” has been used for the recording of the work with Cecilia Bartoli and Giovanni Antonini.

Musica Antiqua Roma, founded in 2007 by violinist Riccardo Minasi, unites the solo, chamber music and orchestral experiences of some of the most active young musicians on the international scene today. Besides Riccardo Minasi the ensemble is formed by Marco Ceccato (cello), Giulia Nuti (harpsichord) and Luca Piancha (archlute).

This collection represents a selection of Handel's most popular violin sonatas. The eight sonatas recorded here span more than four decades and bear witness to Handel’s broad stylistic range. They all contain wonderful music and have been loved by players and listeners since they were written. Six are well known. Two are unfamiliar, and the second of these, in G major, is quite unlike all the others: two brilliant fast movements separated by a brief, highly dramatic slow recitative. The rest are cast in the customary four-movement form, but they still have extraordinary diversity; no two of them sound alike.

Since the musicians have a strong relation to Italy (“Musica Antiqua Roma”) and since Handel’s sonatas are very much influenced by Italien composers of the Baroque period, the artwork is based on works of the famous Italian photographer Mario Giacomelli.

The coupling of the sonatas on this recording is unique, and the 28-page booklet has elaborate liner notes in English, French, German and Italian.

As a bonus extra, the ‘hidden track’ “Credete al mio dolore” (from the opera “Alcina”, arranged for violin by Riccardo Minasi) has been included.

the sumptuous underlay sometimes over-eggs the music, yet it's very much at one with Minasi's warmly lyrical yet purposeful approach...Idiosyncrasies aside, compelling stuff.

these performances are excellent for their lyrical sweetness, stylistic sensibilities, imaginative expressiveness and immaculate recorded sound (recorded in a quiet chapel in Siena). Riccardo Minasi's lively playing is never clumsy and seldom forced.

Minasi takes the view that, whether the eight pieces here are by Handel or not, they are worth playing and hearing. His dazzlingly fresh interpretative ideas, employing techniques that owe as much to the great Romantic virtuosos as to baroque specialists, will raise purist Handelian hackles, but this is a revelatory disc.