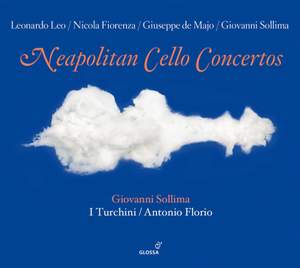 Giovanni Sollima successfully pursued a twin career as cellist and composer and it is in both capacities that the Palermo-born musician appears on this new recording from Glossa. Sollima teams up with Antonio Florio's I Turchini in a captivating demonstration of virtuoso concerto treasures by Leonardo Leo, Giuseppe de Majo and Nicola Fiorenza. The quality of their committed music-making is underscored by Dinko Fabris, in an accompanying essay, which provides a lucid exposition of the contemporary musical climate. Giovanni Sollima’s empathy with the spirit of the 18th century concerto is demonstrated in the elegantly appropriate cadenzas for the works of his forebears and also in his new composition, in keeping with its Neapolitan past ('Fecit Neap. 17..' mirroring the common enscription found on manuscripts of the 18th century).

As well as solo cellist, Giovanni Sollima, who is equally at home in the musical worlds of Patti Smith, Claudio Abbado and Philip Glass; a director in Antonio Florio, who brings his thorough overview of Neapolitan music from the Baroque onwards, this new disc was recorded in the old Santa Anna dei Lombardi monastery complex in the heart of Naples, which serves to point up how powerful a forging ground for cello music Naples was from the end of the 17th century and into the 18th, as well as in our own time.