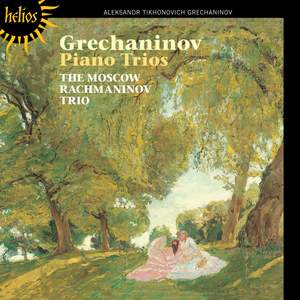 Aleksandr Grechaninov is more widely known for his liturgical music and songs, and his works in other genres were rarely performed until recently. His chamber music in particular is wholly undeserving of the neglect which has befallen it. There are ten major pieces of chamber music by Grechaninov: four string quartets, two clarinet sonatas, a violin sonata and the three works presented here. These lesser-known works reveal that his wide-ranging and creative artistry rivals that of his better-known compatriot composers more commonly represented on disc and in the concert hall.

One work from Grechaninov's Russian days, two from years of exile: music of exuberance and lyricism, though never truly memorable. Fresh and forceful playing, caught in a slightly clamorous recording.

Such an innocent exuberance as well as an amiable lyrical impulse that it is hard not to find the music easy on the ear, especially in such infectious performances—splendidly energetic, and excellently recorded

The committed, forceful playing of the Moscow players makes a strong case for Grechaninov