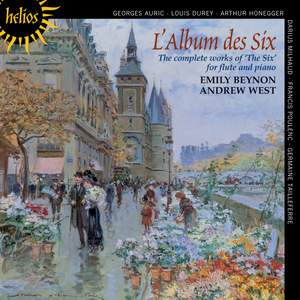 The complete works of ‘The Six’ for flute and piano

Hyperion has enriched the catalogs with far more than its fair share of superb releases, and this is yet another one… urgently recommended to everyone who has even a passing interest in fine... — Fanfare More…

Honegger: Romance for Flute and Piano

‘Les Six’ (so named in 1920 by critic Henri Collet) hit the classical music scene with almost the same outrageous force with which the punk movement slammed into popular music in the 1970s and early ’80s. It consisted of a group of six composers working in France: Francis Poulenc, Darius Milhaud, Arthur Honegger, Georges Auric, Germaine Tailleferre and Louis Durey. Their music was largely a reaction against Impressionism and Wagnerism and incorporated the ideas of Satie and Cocteau with the popular styles of the time: French vaudeville, American jazz and café music. The result was a simple blend of sound with more than a dash of whimsical humour, parody and irony. ‘Les Six’ only formally existed across 1920/21 and its members collaborated in two ventures, the wonderfully surreal divertissement of Les Mariés de la Tour Eiffel of 1921 and the miniature Album des Six for piano (1920) featured on this recording.

The popular highlight here is Poulenc’s Sonata of 1957, which is now standard repertoire for flautists.

Hyperion has enriched the catalogs with far more than its fair share of superb releases, and this is yet another one… urgently recommended to everyone who has even a passing interest in fine flute-playing or works of this period

Emily Beynon plays quite beautifully throughout. This is a welcome recording

An ingenious piece of programming by the Royal Concertgebouw Orchestra’s (Welsh) principal flautist and the pianist Andrew West: they have gathered together the complete works for flute and piano by the group of French composers known as Les Six and titled the record after the only
work—a set of solo piano pieces—on which all six collaborated. Although the ‘collectivisation’ of these six musical personalities was the brainwave of a music critic in 1920, the flute and piano pieces recorded here date from the early 1920s to the 1970s. Poulenc’s dazzling Sonata (1957), brilliantly
played by Beynon and West, is the highlight of an absorbing and hugely entertaining disc