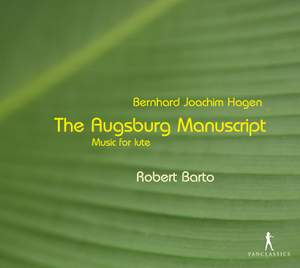 It is perhaps no coincidence that the last flowering of the lute took place under the patronage of a former lute student and great admirer of Sylvius Leopold Weiss: Wilhelmina, Princess of Prussia and sister of Frederick the Great. In her role as Margravine of Brandenburg, she employed in Bayreuth three of the best lutenists of the post-Weissian era. Adam Falckenhagen, Charles Durant and Bernhard Joachim Hagen (1720-1787) all active at the court in Bayreuth.

Hagen’s known works are in a single large manuscript, found today in the City Library of Augsburg. In his use of the lute, Hagen reflects the influence of the virtuosic style of Falckenhagen and Durant. Brilliant arpeggio work, extremely fast plucked and slurred scales over several octaves, double trills and use of the highest frets are all commonplace. Adde to this, the combination of tuneful melodies and virtuosic flair make Hagen a perfect representative of the gallant style which was prevalent in mid-18th century Germany. His works are the last substantial contribution to the lute repertoire and he can truly be called the last great lute virtuoso.