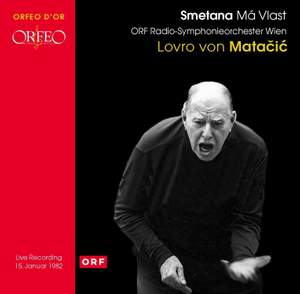 this is a deeply felt, beautifully played interpretation that ranks among the most moving on disc. Complete performances were still rare outside Czechoslovakia, and you're very aware of the audience... — The Guardian, 12th April 2012, 4 out of 5 stars More…

No. 4. Z ceskych luhu a haju (From Bohemia's Woods and Fields)

Although he was never one of the 20th century’s most prominent conductors in terms of festival appearances and recording contracts, Lovro von Matacic (1899–1985) was in many ways comparable to today’s top conductors. He was a welcome visitor to the world’s major concert platforms and opera houses from La Scala, Milan, to the Bayreuth Festival and the Chicago Lyric Opera in repertoire extending from the Baroque to contemporary works and his own compositions.

A native of Croatia, he tended towards the end of his life to limit his appearances to Monte Carlo, Tokyo and especially Vienna, where he had been a member of the Vienna Boys’ Choir in his youth and where for many years he remained active at the State Opera.

ORFEO now release a live recording of a concert that he gave with the Austrian Radio Symphony Orchestra in 1982. On the programme was Smetana’s symphonic cycle 'Má vlast' (My Fatherland), a cycle that Matacic himself had asked to conduct. He seized the opportunity to give a non-Czech audience the whole work, rather than just 'Vltava', often performed in isolation in the concert hall. Smetana’s talent for melody can sometimes sound sentimental, even kitschy, but Matacic avoids that impression thanks to his tight control, and this is true even of those unashamedly patriotic passages where precision is of paramount importance. Matacic’s Viennese interpretation impresses.

this is a deeply felt, beautifully played interpretation that ranks among the most moving on disc. Complete performances were still rare outside Czechoslovakia, and you're very aware of the audience responding with ever-increasing enthusiasm to music with which many would have been unfamiliar at the time.