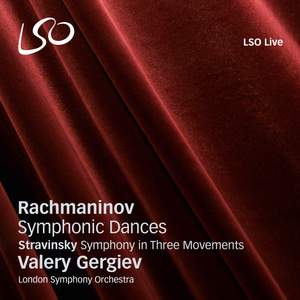 these are thoughtful, well-considered performances, excellently played and recorded...Gergiev's rather deliberate tempo in the first movement of the Rachmaninov seems to stress the 'symphonic',... — BBC Music Magazine, July 2012, 3 out of 5 stars More…

An orchestral suite in three sections, the 'Symphonic Dances' were the last works Rachmaninov completed and proved to be some of his most popular. Although rarely sentimental, they draw on folk idioms and the composer’s reminiscences of Russia, from where he emigrated in 1917.

Stravinsky’s 'Symphony in Three Movements' was written between 1942-45 and was the first work Stravinsky completed after his arrival in the USA. Although he claimed it was a ‘War Symphony’, his true inspiration was typically vague.

Following an extensive tour of the Far East with the LSO in February and March, Valery Gergiev conducts concerts throughout Europe in with the Mariinsky Orchestra, including performances in the UK.

these are thoughtful, well-considered performances, excellently played and recorded...Gergiev's rather deliberate tempo in the first movement of the Rachmaninov seems to stress the 'symphonic', rather than the 'dance' aspect of this work...Much the same might be said of the Stravinsky: overall the emotional temperature seems a bit low, despite some highly exciting passages and refined solo playing in the more lyrical moments.

[Gergiev] elicits a fair amount of instrumental detail from Rachmaninov's luminous scoring [in the Symphonic Dances] but it is at the cost of cohesive overall structure...[the Symphony in Three Movements] is a big-boned performance, its syncopations crisply articulated by the LSO, its powerful rhythmic impetus kept on a tight rein, its palette of timbres well delineated.

Gergiev gives us a bold, exciting account of Stravinsky's wartime cracker: wild and rough at the edges in the outer movements; unsentimental, even brusque in the 'soft centre'.

Gergiev’s reading is a satisfying one and the LSO are on superlative form… Punchy, powerful stuff, in close-up, vivid sound.