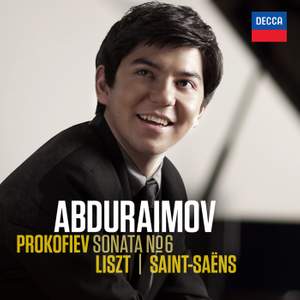 An inventive transcription of Saint-Saens's hackneyed classic allows him to establish immediately his light, transparent touch and immaculately controlled pyrotechnics, while in the middle section... — BBC Music Magazine, August 2012, 3 out of 5 stars More…

The debut recording from the superb young pianist, who, at the age of just eighteen, won a sensational victory in the 2009 London International Piano Competition, with an electrifying performance of Prokofiev’s Piano Concerto no. 3.

Born in Tashkent, Uzbekistan, Behzod Abduraimov is already a mature concert artist who thrills audiences wherever he appears – including an Asian tour with the Sydney Symphony Orchestra under Vladimir Ashkenazy, where he was dubbed by the press: “The Western Lang Lang”. An extraordinary combination of youthful passion and an astonishing technique gives his performances an irresistible, life-enhancing energy.

“. . . thought arose: could this fresh-faced child be a new Horowitz?” (The Independent)

An inventive transcription of Saint-Saens's hackneyed classic allows him to establish immediately his light, transparent touch and immaculately controlled pyrotechnics, while in the middle section he displays a Lisztean grace...La benediction de Dieu is conceived with such refined attention to pace and detail that the poetry is fully released, with the sound possessing a silky sheen.

Here is a good-themed programme from this 20-year-old Uzbek newcomer of 'demonic dances, God and war, combining technical virtuosity with music fireworks'...The First Mephisto Waltz is fast, accurate and powerful but it won't have you on the edge of your seat...No, but he's a new face on the scene with bags of talent whose future will be well worth watching.

his debut disc naturally includes plenty that shows off his virtuosity, but music of greater emotional complexity lies at the heart of his programme. Prokofiev’s Sixth Sonata, a complex mix of mood, has kaleidoscopic colour, fierce intensity and, notably in that aching slow-movement waltz, genuine soul.

His Danse Macabre has a neurotic, sinister air...and he tackles Prokofiev's Piano Sonata No 6 with both youthful eagerness and maturity. That maturity is even more evident in Liszt's reflective Bénédiction de Dieu dans la Solitude, whose subtle shifts of timing and emphasis he negotiates with apparently effortless command.

an artist not only of extraordinary technical ability, but also one with a terrific musical personality and sensibility. Those qualities come through clearly on this disc...there is no doubt that Abduraimov has the right intellectual and digital equipment...The two contrasting Liszt pieces at the end...glowing testimony of a talent that is already compelling and certainly one to watch.

Abduraimov is a young master, that is clear. With luck, time will bring craftier control of musical structures and dynamic shifts...However, he is already well past the point of being brilliant and nothing more. He’s also a player who feels and thinks, and still seems to enjoy performing — a quality not visible in some other young gymnasts of the keys...There’s a big natural talent at work here.