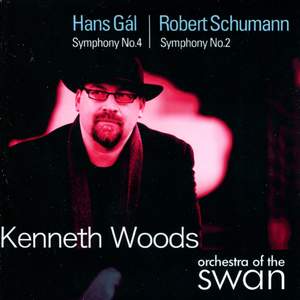 Orchestra of the Swan, Kenneth Woods

The Orchestra of the Swan provide a quietly compelling account, relishing the many solos, duos and textural intricacies that Gal wrings from his orchestra. Their account of Schumann's C major... — Gramophone Magazine, July 2012 More…

Kenneth Woods and Orchestra of the Swan continue their revelatory cycle pairing the symphonies of Hans Gál and Robert Schumann, with the world premiere recording of the Gál’s Fourth and Schumann's Second.

Kenneth Woods’ and Orchestra of the Swan’s world-premiere recording of Hans Gál’s Symphony No. 3, coupled with Schumann’s Third (AV 2230), was one of the most lauded classical releases of 2011. With features on National Public Radio’s All Things Considered and Performance Today, in Gramophone and BBC Music Magazine, and dozens of newspaper and online reviews, a new generation is discovering and seeking out Gál’s wide-ranging and extensive oeuvre. Ken, a prolific blogger, further stokes the interest with his extensive posts on A View from the Podium, one of the 25 most read classical blogs in the world.

Woods and OOTS continue their cycle which pairs these two composers, with the world premiere of Gál’s Fourth and Schumann’s Second. Written in his ninth decade and premiered in 1975, Gál’s Fourth and final Symphony is scored for chamber orchestra and akin to a concerto grosso. The music exhibits Gál’s trademark pastoral and lyrical style, yet inwardly this is music of intense rigor and deep concentration. While Gál’s compositional pedigree is strongly linked to the Austro-German tradition of the Viennese classical masters, Schumann’s Second looks to an earlier era, taking much inspiration from the spirit of J.S. Bach with its contrapuntal textures and chorale themes.

The Orchestra of the Swan provide a quietly compelling account, relishing the many solos, duos and textural intricacies that Gal wrings from his orchestra. Their account of Schumann's C major brings playing necessarily of great fire...Woods's finely wrought interpretation confirms his credentials - if confirmation were needed - as a symphonic conductor of stature.

the soloists take part seamlessly in a constantly evolving symphonic argument, not so much displaying their virtuosity as bringing out the individual voices of Gal's deft and intricate polyphony, into enhanced relief...[they] play throughout with refinement, beautiful tone, an understanding of the idiom and composer's polyphonic web. All in all, this is a very welcome and highly recommendable release.

As far as this symphony is concerned, time really does seem to have stopped for Gál in the 1930s. I leave readers to decide whether this matters. They will certainly find a skilfully assembled work...if you like late Strauss, give it a try. The performance seems excellent.