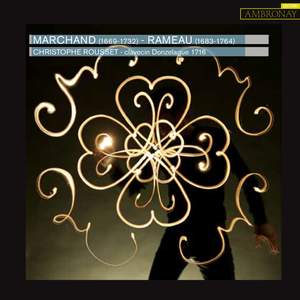 Rousset's scrupulous technique and sinewy fingerwork make light of this highly wrought style...He reads the unmeasured preludes with improvisatory flair and is ever responsive to the pliant rhythms... — BBC Music Magazine, August 2012, 5 out of 5 stars More…

"Louis Marchand is the French composer who has entered legend for a musical duel with J. S. Bach which he is supposed finally to have dodged. But to make one’s mark on posterity that way is a sad comedown for so eminent a composer of organ and harpsichord music. Although he died in the reign of Louis XV, he retained in his style a nobility of tone wholly typical of the age of Louis XIV.

The conception of harpsichord sound in Marchand is much closer to d’Anglebert than to Rameau. Like his predecessor, he employs a profusion of ornaments which considerably enrich the sustaining power of the sound and mean that a string is kept constantly in vibration. He uses the medium-low register in preference to the treble, thus bringing the harpsichord closer to the theorbo or the bass viol. Rameau, for his part, immediately imposes his new and revolutionary conception of music. Everything here breathes harmony. The discourse is always deliberately clear, favouring transparency over the bombastic effects of a more sensual harpsichord sound. The link that inspired me to choose this programme for the sumptuous Donzelague harpsichord, which, it may be recalled, was only just saved for the nation when I was still a student with Huguette Dreyfus (I can still remember the inaugural concert at the Salle Gaveau where my teacher played Rameau on it, among others) is, of course the city of Lyon. Donzelague built his instruments in Lyon; Marchand was born and studied the organ with his father there. Rameau lived in Lyon for a period in 1713, composing his grands motets there. During his brief stay in Paris in 1706, he took up residence opposite the Church of the Cordeliers where Marchand just happened to be organist at the time, and attempted to solicit the favour of the Parisian public by publishing his first opus at so early an age.

This Donzelague harpsichord, like the instruments by Nicolas Dumont from the early years of the 18nth century, is extended down to the low F, thus abandoning the 17th-century French tradition of the G’-B short octave. Hence it allows the music on the present recording to sound in its full sonic and declamatory amplitude."

Rousset's scrupulous technique and sinewy fingerwork make light of this highly wrought style...He reads the unmeasured preludes with improvisatory flair and is ever responsive to the pliant rhythms of the dance movements...The magnificent early 17th-century harpsichord is by Pierre Donzelague...Its voluptuous sound and temperament enhance Rameau's spicy colours and the burnished sonorities of Marchand's Suites.

almost everything on this intriguing disc seems to flow from the choice of instrument...It is more urgent than elegant, yet remarkably alert and precise. Everything becomes crisper...Rousset's reading is tightly wound, uncommonly so for this player. Ornaments are snapped and inegalite is subtle to the point of being more a matter of impression than discernible gesture.