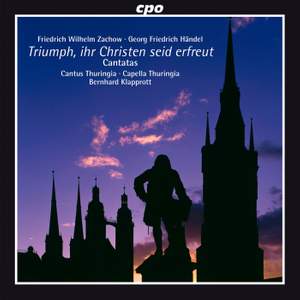 It seems to me that their authenticity is unlikely but it is entirely understandable that the enterprising Thuringian performers have devoted efforts to reviving what might possibly be among... — Gramophone Magazine, July 2012 More…

Zachow was active over a period of twenty-eight years and numbered among the most renowned church musicians of his epoch (J. S. Bach applied to succeed him in 1712). Just how much George Frideric Handel valued his teacher and his music is shown by his continual citing of compositions by Zachow in his own work even during his years in London.

The authorship of the two cantatas presented on this release – often ascribed to Handel – remains uncertain and has been discussed many times in musicology. One thing remains clear: both works are from Zachow’s musical circle of influence around 1700. Even if the cantatas turn out not to be by Handel, he no doubt would have known them and heard them. In this respect, this CD makes a significant contribution to our understanding of the young Handel’s Halle environment.

It seems to me that their authenticity is unlikely but it is entirely understandable that the enterprising Thuringian performers have devoted efforts to reviving what might possibly be among the very few scraps of Handel's earliest attempts at composition...the ensemble of solo voices communicates the pious texts sincerely...A rewarding curiosity.