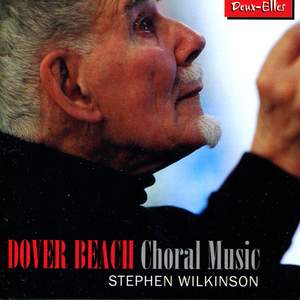 expertly performed by a choir of 21 singers, under the composer's direction. Freshly melodic music, with imaginatively contoured part-writing. — BBC Music Magazine, June 2012, 4 out of 5 stars

Wilkinson, S: Rowing Down the Tide

Wilkinson, S: The Sheep Under the Snow

On Such a Day

Wilkinson, S: As I Walked Out (Y Deryn Pur)

Wilkinson, S: That Time of Year

Wilkinson, S: The lark in the clear air

Stephen Wilkinson was conductor of the BBC Northern Singers until well into the 1980s (when they became the Britten Singers). They sang widely around Europe, in Australia, Thailand and Hong Kong and made a number of records, some selected as Critics’ Choice in Gramophone. His compositional output is not large but includes works premiered at the Aldeburgh Festival and several works that receive air-time on Radio 3.

Dover Beach presents five short a cappella works interspersed with five arrangements of folk-songs, one each from England, Wales, Scotland, Ireland and the Isle of Man.

expertly performed by a choir of 21 singers, under the composer's direction. Freshly melodic music, with imaginatively contoured part-writing.