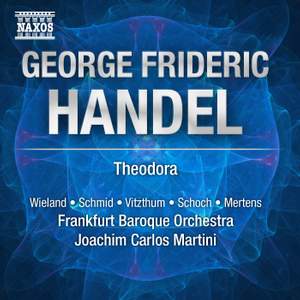 Act I Scene 1: Chorus: And draw a blessing down (Chorus of Heathens)

Act I Scene 1: Chorus: For ever thus stands fix'd the doom (Chorus of Heathens)

Act I Scene 2: Recitativo: I know thy virtues, and ask not thy faith (Septimius)

Act I Scene 3: Recitativo: Though hard, my friends (Theodora)

Act I Scene 4: Chorus: All pow'r in Heaven above, or earth beneath (Chorus of Christians)

Act I Scene 5: Air: Angels, ever bright and fair (Theodora)

Act I Scene 6: Accompagnato and Air: Kind Heaven, if virtue be thy care (Didymus)

Act II Scene 2: Recitativo: But why art thou disquieted, my soul? (Theodora)

Act II Scene 2: Air: Oh that I on wings could rise (Theodora)

Act II Scene 3: Air: Though the honours, that Flora and Venus receive from the Romans (Septimius)

Act II Scene 3: Recitativo: Oh save her then, or give me pow'r (Didymus, Septimius)

Act II Scene 5: Recitativo: Or lull'd with grief or rapt her soul to heaven (Didymus)

Act II Scene 5: Recitativo: Or say, what right have I to take what just reflection (Didymus, Theodora)

Act II Scene 5: Duet: To thee, thou glorious son of worth (Theodora, Didymus)

Act III Scene 2: Chorus: Blest be the hand, and blest the pow'r (Theodora, Chorus of Christians)

Act III Scene 4: Recitativo: Is it a Christian virtue then (Valens, Didymus) - Scene 5: Be that my doom! (Theodora, Septimius)

Act III Scene 7: Recitativo: Ere this their doom is past (Irene)

Set in a time of ancient Rome’s persecution of the Christians, Handel’s late masterpiece Theodora tells of the tragic martyrdom of the heroine and her lover Didymus. The challenging nature of the libretto with its religious conflict, cruelty, self-sacrifice and brothel scene was discomforting for contemporary audiences, and despite Handel’s magnificent music the oratorio was his least successful.

This is part of a series of Handel oratorios from Martini and Junge Kantorei.

Joachim Carlos Martini’s series of Handel’s oratorios has gained considerable critical acclaim and a sizeable following, with ‘first rate’ recommendations from publications such as the Penguin Guide (on Tobit, 8570113-14). Controversial in its time and relatively neglected since, if anything the themes of Theodora resonate more today. Handel’s masterly score is given a tremendous performance here, with a recording consistent with the extremely high standards of the rest of the series.

Capable soloists provide some fine moments despite the awkwardness of their English vowels; Franz Vitzhum performs Didymus tastefully, Knut Schoch's singing is intelligent and Diana Schmid's 'Defend her, Heaven' is captivating...The Frankfurt Baroque Orchestra is on good form and Martini respects Handel's orchestrations but his conducting is often lugubrious.

[Mertens's] voice is so fresh-sounding that I think few would know that he was just over 60...Very clear in all he sings is Knut Schoch as Septimius...[Schmid] has a soft grain to her tone, which suits the gentle Irene...A crystalline quality marks Wieland's pure sound, also fitting her character. She is limber in her swifter arias and blends beautifully with the Didymus of Franz Vitzhum...all he does in this performance is worth listening to.

it's the singer in the role of Irene, the mezzo Diana Schmid, who attracts most attention, with the generosity of her phrasing and warm even tone.