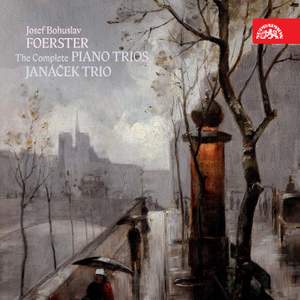 And as in the case of the string quartets, the three piano trios too represent various creative phases, with the first and third being divided by almost four decades. Foerster dedicated his first trio to Edvard Grieg. The Norwegian composer lauded “the earnest, emotionally profound talent, tending towards high ideals”. The final trio was written in Prague, where Foerster had returned after living and working in Hamburg and Vienna for twenty-five years. The piece reflects the tumultuous postwar musical development and can be designated as one of Foerster’s most progressive compositions.

The young and gifted Janáček Trio interprets Foerster’s works with an understanding of the composer’s inner world and complete engagement.