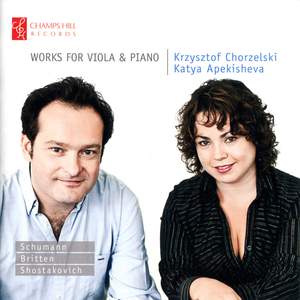 Krzystof Chorzelski and Katya Apekisheva seem more concerned with ensuring that the few dramatic sections in the work are projected with the greatest immediacy. As a result, the sudden explosion... — BBC Music Magazine, June 2012, 5 out of 5 stars More…

Originally published for viola, with violin as an alternative, Schumann’s Märchenbilder Op. 113 of 1852, are part of the group of lyric pieces that he composed in the late 1840’s and early 1850’s, designed as satisfying music for amateurs to perform in domestic settings. That said, the dedicatee of these pieces, Wilhelm Wasielewski, leader of the Düsseldorf orchestra was no amateur, something reflected in the viola writing for these ‘Fairytale Pictures’.

“The third movement feels to me like Schumann’s response to Der Erlkönig and the last movement is one of his most touching ‘songs without words’” says Krzysztof.

Britten’s Lachrymae, subtitled ‘Reflections on a Song of John Dowland’, were written almost 100 years later and recall the most famous of Dowland’s instrumental solos the Lachrymae Pavan or Flow my tears. But the lute song on which Britten principally bases his six reflections is a love-lorn lament, the melancholy song If my complaints could passions move. Inspiration to write for viola had come from Britten’s meeting with the virtuoso William Primrose who gave the premiere performance in Aldeburgh in June 1950.

Shostakovich’s Sonata was composed from April to July 1975 (he dies in August of that year). Dedicated to Fyodor Druzhinin, long-time friend for Shostakovich and violist of the Beethoven Quartet since 1966. The musical texture of this work is spare and austere, and although it’s misleading to think of it as a deliberate gesture of farewell, there is the sense of pain and valediction as well as defiance and a sardonic humour that run through all his late works. The three movement work opens with what Shostakovich characterised as a ‘novella’, followed by a grotesque scherzo and finishes with an adagio which quotes Beethoven’s ‘Moonlight’ sonata. In 2006 musicologist Ivan Sokolov revealed an extraordinary discovery: that Shostakovich had woven a tissue of tiny quotations from all 15 of his symphonies, in order, into the viola and piano parts. “Recording this work has been a very moving experience for Katya and myself. There’s a fragility to this music which requires a lot of courage from the performers.”

Krzystof Chorzelski and Katya Apekisheva seem more concerned with ensuring that the few dramatic sections in the work are projected with the greatest immediacy. As a result, the sudden explosion of anguish in the middle section of the first movement sounds even more impassioned here...[Chorzelski] negotiates its contrasts in texture between each of the variations most effectively.

This is a finely constructed recital that tests the mettle, both expressive and technical, of both musicians...They make a first class ensemble partnership, and calibrate Schumann’s Märchenbilder with rich, well balanced sensitivity.