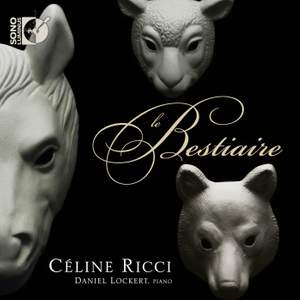 In this fascinating and spellbinding album, political satire, fables, and lessons learned through animal personification is the creation of the world that is Le Bestiaire, ingeniously depicted by soprano Céline Ricci and her pianist and collaborator, Daniel Lockert and presented by Sono Luminus.

In this collection of songs by Jeanne Herscher Clément, Henri Sauguet, Jacques Ibert, André Caplet, Gabriel Grovlez, and Déodac de Séverac, the listener becomes enthralled with the base concepts of humanity depicted by the words of René de Brimont, Paul Éluard, Charles Baudelaire, Jean de la Fontaine, and Prosper Estieu. Often interesting and sometimes amusing, the observation of how animals have been personified in literature throughout the centuries strikes a chord with people of all ages. For different purposes, authors have made them behave like humans, giving them the capacity to speak, or using them as a symbol for thoughts, feelings or even people. This fascinating disc compiles a succinct anthology of French songs combining well-known poetry with more obscure pieces in order to showcase a variety of human expressions through music.

Born in Florence of Italian and French parents, soprano Céline Ricci studied in Paris with Ana Maria Miranda continuing her post-graduate studies at the prestigious Guildhall School of Music and Drama in London. Renowned conductor William Christie selected this gifted artist for his first elite academy, Les Jardin des Voix. She was named one of opera’s promising new talents by Opernwelt. She has subsequently made many appearances under the baton of this conductor and his prestigious Les Arts Florissants and continues to have engagements with them well into the future. Céline Ricci already has an impressive discography including a number of audio recordings and three DVDs. The recent release of Terradellas’ opera Artaserse, singing the role of Arbace, garnered a great deal of critical acclaim. In her character’s 8-minute aria, Opernwelt singled out Ms Ricci’s exciting performance as being a “tour de force” and she was also described as having “faultless breath control, total security and perfect round tone.” This is Céline Ricci’s first solo recording, which also marks her partnership with pianist/collaborator Daniel Lockert.

Daniel Lockert is a multi-talented pianist/collaborator. He was honored as the only American finalist at the first International Accompanying Competition held in Den Hague, the Netherlands. In his role as pianist/collaborator, his wide-ranging career has taken him around the globe, playing throughout the United States, Europe, Japan, Australia and New Zealand. He has been praised for exhibiting a strong sense of rhythm, lovely variety of touches, and a convincing sense of historical style.