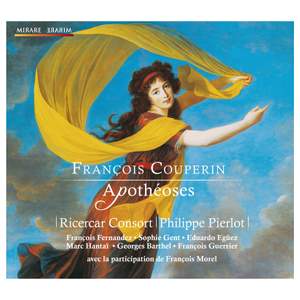 Philippe Pierlot and his superb Ricercar Consort present tributes to both Corelli and Lully with the two Apothéoses by François Couperin, written in the memory of Arcangelo Corelli and Jean-Baptiste Lully respectively. Behind them is an aesthetic programme: they are a plea for the mixture of the Italian and the French style, the so-called goûts réunis. The ensemble consists of Marc Hantaï and Georges Barthel (transverse flutes), François Fernandez and Sophie Gent (violins), Philippe Pierlot (viola da gamba), Eduardo Egüez (theorbo and guitar) and François Guerrier (harpsichord). Both pieces are given lively and expressive interpretations: Couperin's Apothéoses are in the tradition of the tombeau, and therefore the Tombeau de Monsieur de Lully by Jean-Féry Rebel fits well into the programme and is performed in between the two pieces by Couperin.

The consort's performance is superbly stylised, from the disarming simplicity of Corelli's 'sleep' to the delicate cross-rhythms of a gentle Lullian 'air'. Jean-Fery Rebel's Tombeau de Monsieur de Lully, which divides the Couperin pieces, spectacularly contrasts Italian fire with French lyricism. The programme is excellently recorded in a glorious acoustic.

It is a neat idea to bring together Couperin's complementary celebrations of the competing national styles of the mid-Baroque...Couperin is seeking essentially musical means to achieve his programmatic purpose, ingeniously and fascinatingly throwing extra emphasis on the very subject at hand.

The first thing to say about this disc is that it has a truly gorgeous sound. Th Ricercar Consort has taken a minimalist approach to instrumentation...The Consort plays these serious but entertaining works with considerable charm and superlative technique, sounding at once magisterial and superlative.