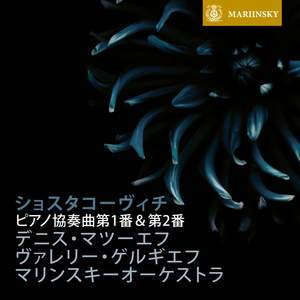 these new accounts of the two Shostakovich Concertos must be among the best currently available. He is brilliant and mercurial in the fast movements of both works, creatively negotiating tempo... — BBC Music Magazine, April 2012, 4 out of 5 stars More…

Since winning the 11th International Tchaikovsky Competition in 1998, Denis Matsuev has established a reputation as one of Russia’s leading pianists. His first release on the Mariinsky label, featuring Rachmaninov’s Piano Concerto No. 3 and 'Paganini Variations', received widespread acclaim. He has toured throughout Europe and North America with Valery Gergiev and the Mariinsky Orchestra, as well as performing with the LSO, Berlin and New York Philharmonics. For his second Mariinsky release with Gergiev he turns to music by Shostakovich and Shchedrin.

Despite being a prolific symphonist, Shostakovich only wrote two piano concertos. His first features a prominent solo trumpet part which provides dialogue with the piano and an independent voice ‘commenting’ on the music of the piano and orchestra. Shostakovich draws in numerous musical styles within the work and displays his usual wit and sardonic humour.

The Second Concerto, by contrast, is more unified and is unusually happy and optimistic in nature for Shostakovich. This may be because it was written for his son, who gave the première, and has been described as showing “the composer as though his own youth had returned to him”. The slow movement contains some of Shostakovich’s most achingly beautiful music – almost Rachmaninov-like in its Romanticism.

Rodion Shchedrin has so far composed six piano concertos, each signifying a new phase in his compositional development, as well as a double concerto for piano and cello and a substantial corpus of solo piano works. His Fifth Concerto is influenced by the music of both Shostakovich and Prokofiev.

these new accounts of the two Shostakovich Concertos must be among the best currently available. He is brilliant and mercurial in the fast movements of both works, creatively negotiating tempo and style and bringing a sense of elan to the Second's outer movements...This unfamiliar coupling offers added value for any collector of Russian music.

everything comes easily together in Shostakovich's Second Concerto, where both soloist and conductor reveal the music's disarming meoldic wit in a relaxed, unpressured manner and deliver a heartfelt, touchingly inflected reading of the Andante that allows the cellos plenty of room to sing out.