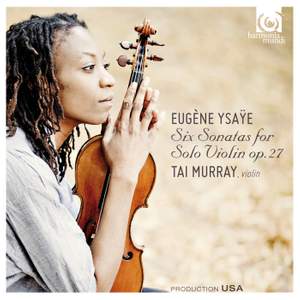 Murray is the latest in a long line of soloists who have managed to conquer most of [the Sonatas'] technical difficulties and focus on the music. I say most: the opening of his First Sonata could... — BBC Music Magazine, May 2012, 3 out of 5 stars More…

Chicago-born violinist Tai Murray was named a BBC New Generation Artist in 2009. She makes her harmonia mundi début in this dazzling reading of the six solo Sonatas which Eugène Ysaÿe penned in 1924. Since their publication these sonatas have offered a benchmark to subsequent generations of violinists.

Acclaimed as “a fabulous player, statuesque and strong, with a flawless control of line” (The Daily Telegraph), violinist Tai Murray is a rising star of her generation and is increasingly in demand for both recitals and orchestral engagements. She has performed on the stages of many of the world’s great concert halls including New York’s Carnegie Hall, and has collaborated with a wide range of conductors and instrumentalists, such as Marin Alsop, Alan Gilbert, Richard Goode, Dmitry Sitkovetsky and Mitsuko Uchida. She recently made her recital début at London’s Wigmore Hall as well as appearing at the BBC Proms and with the BBC Symphony, the BBC Scottish Symphony, the National Youth Orchestra of Venezuela amongst others. Winner of an Avery Fisher Career Grant in 2004 and a former BBC New Generation Artist (2008-2010), Ms. Murray is a native of Chicago. She performs on a Giovanni Tononi instrument, c. 1690. Upcoming chamber appearances include the West Cork Festival in Bantry, Ireland, and the Mozartiade in Augsburg, Germany.

Murray is the latest in a long line of soloists who have managed to conquer most of [the Sonatas'] technical difficulties and focus on the music. I say most: the opening of his First Sonata could be thrown off with greater abandon, and in general Murray could take more risks...Murray is more effective in the intimate moments.

the yearning Murray creates by way of her seamless lines is heart-wrenching...the perfection of [her] intonation, especially in the many virtuoso passages of fast-moving, random intervals of no predicable pattern, has tipped so far over into another league of accuracy that it adds an extra dimension of enjoyment to an already superlative disc.

The Independent on Sunday 25th March 2012

Murray's reading is vivid and imaginative: elegant in the baroque double-stopping of the first sonata, feverish in the second, sheer and smooth in the fourth, flirtatious in the sixth.