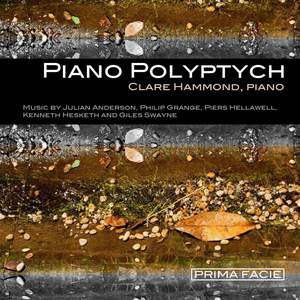 In a brilliant generation of British pianists, Clare Hammond stands out for passionate intellect, dazzling technique and total command of structure, variety and style. Power and poetry are demanded and displayed with breathtaking virtuosity in this recital of music by Giles Swayne, Philip Grange, Piers Hellawell, Julian Anderson and Kenneth Hesketh. The pieces, all from the last 25 years, were chosen to show the extraordinary vigour, invention and stylistic variety of recent British piano writing.

Not yet 30, Clare reached the finals of BBC’s Young Musician of the Year (2004), won the 2006 International Students Prize, has performed across Europe, Canada and Russia, at Wigmore and Barbican Halls in London, and Manchester’s Bridgewater Hall, and was selected for the 2010 PLG Young Artist series at the Southbank. Since her debut with orchestra aged 11 she has built up an extensive concerto repertoire which she has performed across the UK and on the continent. A committed chamber music performer, she has collaborated with, amongst others, Andrew Kennedy, Jennifer Pike, Philippe Graffin, Laurence Power and the Dante, Endellion and Benaim String Quartets.